Apple touts its products as being for the everyday user and being designed to be simple to use. The many fans of Apple computers, tablets and phones, argue that its products “just work” as opposed to other software, systems and equipment.

That’s not at all true. I use Apple’s OSX on a Macbook Pro. I also use Windows and Ubuntu. I have an iPhone, and an Android tablet. They all have their quirks and oddities and things that just DON’T work. Apple is no exception. Sometimes their stuff just does not work.

Note to Apple Fanbois: I’ve been using Macs for decades. I’m not dim and I’m a fairly competent computer user. I like some of what Apple makes, but not everything!

I got some photos from my brother-in-law of his new baby daughter. I wanted to print them. So I downloaded them from the email and then imported them into Apple’s Photos application. I went to print them. Here’s what I saw: 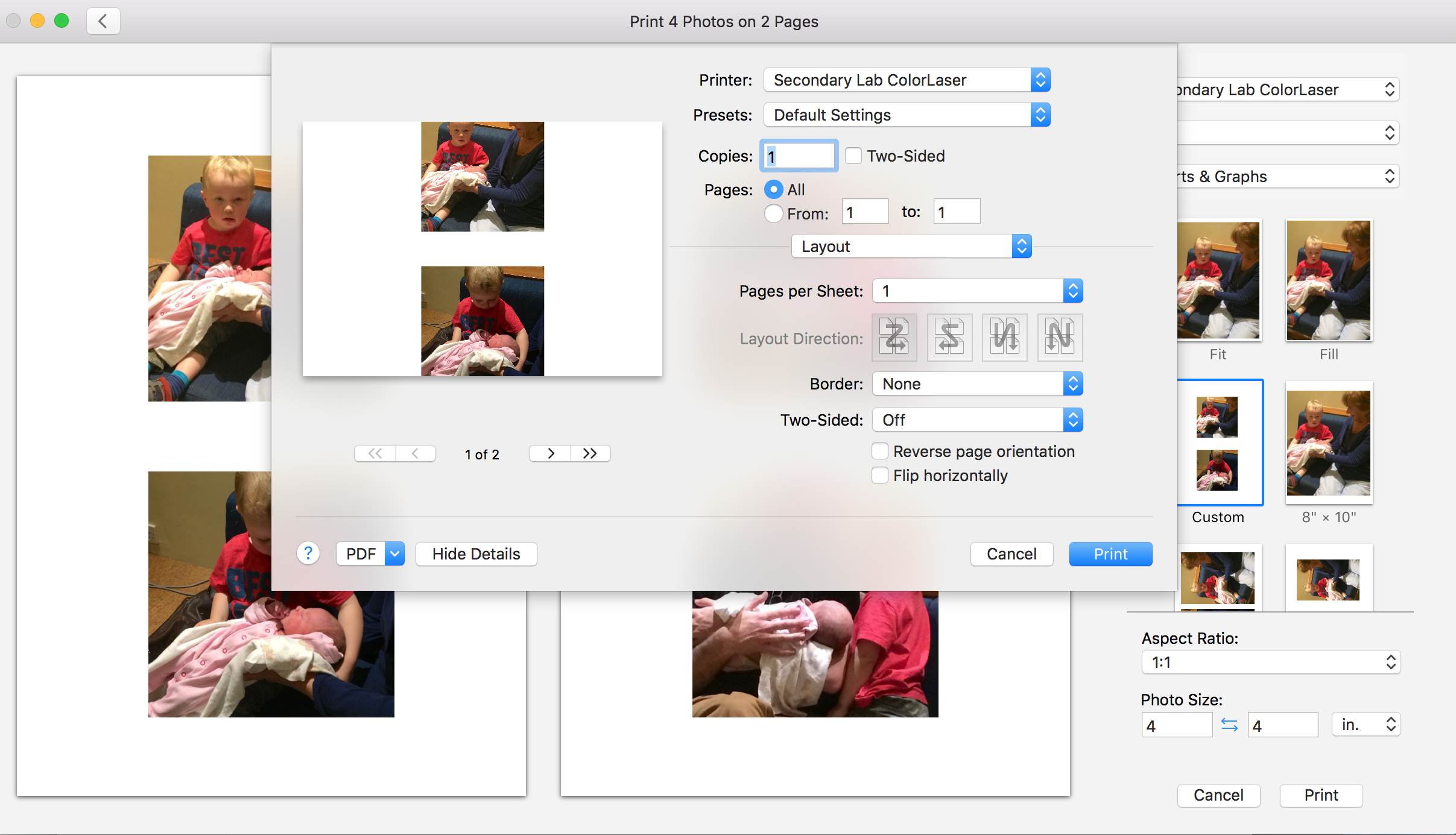 For some reason, Photos decided to print my photos on a landscape page, even when the preview showed the paper as portrait. An there’s no way to change that. I looked. No “page setup” and no orientation settings in the print dialogue. No way to change the photos’ orientation on the page. I tried all kinds of menus, various options, different settings. Nothing changed the way it came out or let me print a whole photo on a page.

Not being a person to let an application defeat me, I went searching for a solution. I found others had discovered the same problem and posted their problems online. All agreed that there was no way to change the orientation of the print job. There were a few workarounds suggested, so I tried them …with no luck. I posted my question on Apple’s online community forum and got some more workarounds from a helpful member of the community …which didn’t solve my problem.

I am used to working with many applications on many operating systems. This is an application created by Apple and bundled with its operating system. It’s made to be a simple photo management program – and is THE system that Apple promotes and supports. But it lacks a basic feature, which interferes with users’ ability to get things done.

I’ve advocated for free and open source software, including the Ubuntu operating system, for years. People have complained that the software isn’t “intuitive” and that installing software or setting things up on Linux is complicated and requires looking things up, finding workarounds, etc. I’ve said that sometimes easy isn’t better and that if things are hard it may be worthwhile. I’ve been shouted down when I’ve advocated for alternatives and told that our school needs to use Apple and other commercial software because it “just works” and doesn’t interfere with teaching and learning. I’ve given in and our school is now a Macintosh and Windows school, a Google school, a Microsoft Office school.

I fixed my problem: I took the photos out of Apple’s Photos, put them into a draw document in the free and open source LibreOffice and printed them.

Freedom’s just another word for being in control