It’s been brewing for a while …the feeling that there’s something not quite right with my Macbook Pro. It’s a suspicious feeling – that there’s something in there, acting on its own. I know it’s a totally irrational feeling: I know that computers are machines, hunks of metal and plastic and glass, programmed by people to do what they’re told and only capable of doing that.

The other night, I was checking my home wifi network. Our bandwidth isn’t great, and I’ve worked to set things up so I can manage the use of the bandwidth by the devices that I and the rest of my family own and use. I saw that my laptop was using up much of the bandwidth, so I went to go and check on it and close down whatever it was downloading.

My laptop was closed.

I know that closing the laptop is not the same thing as shutting it down, and that there’s a trickle of energy keeping processes going while a laptop is in “sleep” mode, but this closed machine was downloading something and using up my bandwidth. I shut it down properly and decided to investigate more in the morning. 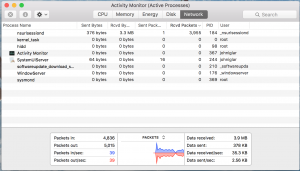 I started it up and saw that there was a very active process, nsurlsessiond. I’d seen other sessions active and had done some investigation. OSX is now  configured to automatically sync files, look for updated programs, etc. I’d done some research and changed all the settings I could find but here it was again: the computer was uploading and downloading files while no other programs were active on the computer. It should have been quiet.

I left it for a bit, and the connection got even more busy. It was constantly sending and receiving packets on my network. It managed to download around 10MB of data (and sent another .5MB) as it sat closed while I ate my breakfast. This was a busy little computer for a machine that had no programs running and (as far as I knew) all preferences set to not automatically connect to anything.

I had done some research about this and found a fascinating discussion thread on Apple’s support forums about this process. Plenty of people have been having this problem with their Macintosh computers – some with much bigger problems than mine. It was merely an annoyance for me, but for people paying for every MB of their connection, this was a costly process that was running without the knowledge or command of the computer’s owner.

One particular post by mikelravizza struck me as particularly insightful (or at least one with which I could agree):

I’m tired of Apple’s multitude of hidden and newly introduced network daemons  eating my BW.  Don’t get me wrong, some are useful, but most are not, and hardly any are documented.. another “we just accept what Apple thinks is best” approach.

It’s a slippery slope both  apple and google are  now blindly sliding down. As revenues start to tighten up, after years of massive profits, its obvious where they will be heading to keep revenues flowing.. us, the user-base with all our data.

Or maybe I’ll just go set up my laptop to boot into Linux and only use OSX when I really have to.