I’m not sure exactly when the realization dawned on me. It might have been when I read about the 16th century fireplace in our guest house. Maybe it was greeting the family taking their daughter to the playground where our child was playing. It might have been when the cook came to talk with us after our pub meal. Or maybe it was while walking across the village green at 10pm, enjoying the summer evening sunshine.

But at some time during the evening, it hit me: we had stumbled across the Holy Grail of tourists visiting England: an authentic, charming, unpretentious and welcoming village.

…and it had just been given a death sentence.

We had been traveling around Europe, spending time in Ireland and Portugal as well as the UK, and were finally overnighting in London between one flight from Portugal and another to the US. All we really wanted was a comfortable room and bed before a long flight across the Atlantic. We were flying into Gatwick and out of Heathrow, so we looked up hotels near both airports. There were plenty of soulless chains, rooms with views over the runways, etc. Then Helen found a charming B&B near to Heathrow but with character and competitive pricing.

We flew in and got a taxi from one London airport to another. The constellation of airports around London strikes us as particularly bizarre, especially as there’s no easy way to get from one to another. Our taxi got bogged down in the traffic on the M25 and we wound up arriving quite late, which got even later as our driver searched for Summerhouse Lane. Eventually we doubled back and saw a beautiful brick building bedecked with flowerpots. 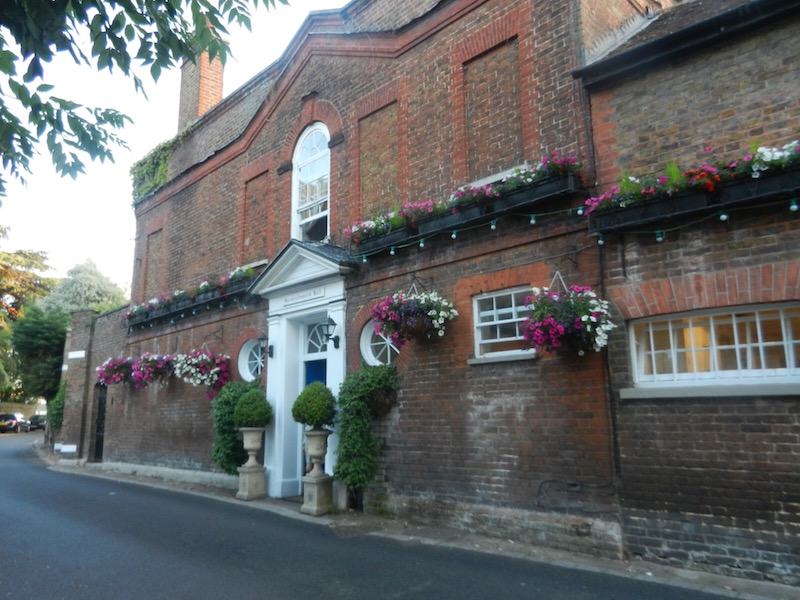 We entered Harmondsworth Hall and were greeted by the owner. We were quickly checked in, helped with booking a taxi for the next day, and moved in to our room. It was a gorgeous room, with big beds, a fireplace and a view out to a cozy courtyard surrounded by trees and neighbouring charming buildings. We went out to enjoy the twilight and find some dinner.

We were directed to a nearby playground for our daughter to burn off some energy. A short walk through an unassuming neighbourhood led us to a playground underneath the flight path. While our child played, a local couple took selfies on the equipment, and then another family came in to let their girl play. We greeted each other and chatted briefly before we headed off to the centre of the village.

We paused on entering the green, taking in a small group of teens hanging out in front of the local chippie. We checked out the two local pubs and decided to have dinner at The Crown.

We ordered our meal and I enjoyed a few pints of bitter. The snooker table distracted us until the food arrived, which we thoroughly enjoyed. We complemented the pub owner on the food, and a few minutes later a young lady came out and introduced herself as the cook. We thanked her for a delightful meal and then strolled out into the late night.

We went across the street to the local mini-mart and off-license to buy some snacks for the next day’s flight and cooed over the young daughter of the bloke who was restocking the shelves. We rang up our purchase with the owner, who told us he was from Portugal and we chatted about Portugal and England. We wished him good health and said we’d look him up next time we came through London. “If we’re still here,” he said.

It was then that the significance of the signs that I’d seen posted around the village became clear: Stop Heathrow Expansion. Walking back across the village green, they were all around. The third runway will destroy communities. Posters hung in front of the 12th century church, by the school …all around.

Looking at the news, we heard that the decision to build a third runway for Heathrow had been made that day. Harmondsworth was directly in the path of the bulldozers. The airport would be expanded and this beautiful village in which every person we had met was friendly, warm and welcoming would be razed to the ground.

So, go and visit Harmondsworth soon before it disappears. Stay at Harmondsworth Hall and enjoy the hotel and village for their typical English charm and their extraordinary welcome. Stroll around the green and soak up the atmosphere of this unique corner of Britain. Soon it will be a spot reserved for airplanes and automobiles zooming along the motorway.

Enjoy it while you can.