There are perks of living an expat life. Besides living in intriguing places and mixing with a variety of cultures, there are also material and social benefits. One of the social benefits – especially if you live in an important capital city like Addis Ababa – is having the opportunity to occasionally rub shoulders with visiting dignitaries and celebrities. This week, I’ve had the pleasure of meeting two, both very different but also both very inspiring.

First, Irish President Michael D Higgins is visiting Ethiopia on a three-nation African tour, and Helen and I got to meet him at a formal reception. (There are perks to being part of a smaller expat community than Americans!) And then, Astronaut and NASA Director Charles Bolden came to Addis Ababa on an international tour, and visited ICS to speak to the students. (There are perks to being a teacher at a big international school!) 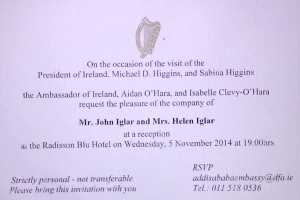 Last month we met the Irish Ambassador, Aidan O’Hara, and his predecessor, Sile Maguire, at the Radisson Blu and got to chatting. We hadn’t seen Sile in years so we asked her what she was doing. She’s now in charge of protocol at the office of the president and she was scouting out his upcoming trip to Ethiopia (and Malawi and South Africa). We wasted no time in asking if we were going to be invited to meet him and were reassured we would. So when the invitation came last week, we were happy if not surprised. 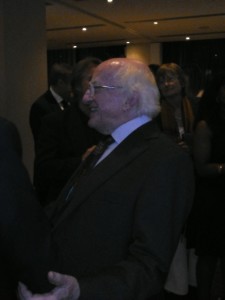 We were eager to meet the man. We’d heard his radio interview in which he ripped into the American Tea Party (calling them “wankers”!)and were impressed by his decency and eloquence. Any president who requests his salary be reduced is worthy of some admiration,  as is any president who’s also a poet. We also had a personal connection: Helen’s dad had gone to university with him and asked us to say hello on his behalf.

So we dolled ourselves up and headed off to the hotel. The place was thronged with Irish priests, embassy workers, workers from various associated NGOs, and other dignitaries. We reconnected with friends from the Irish community who we hadn’t seen in a while and waited for the president to arrive. Once he arrived – having just come back from a visit to the refugee camps in Gambella – he was introduced by Aidan and then gave a speech. 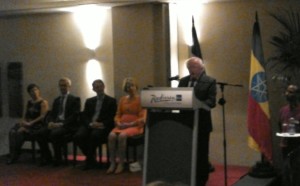 It was a good speech (if lacking the vehemence of his radio interview!) and was received well by the crowd. Afterwards, we joined the formal reception line and got a few seconds to shake his hand and exchange a few words with him and his wife, Sabina. Helen told him that her father remembers him riding his bike around UC Galway and Sabina made sure to get Helen’s maiden name to try to place him. Then we were swept along and met Sean Sherlock, the Minister for Trade Development, and greeted Aidan and his wife, Isabelle. 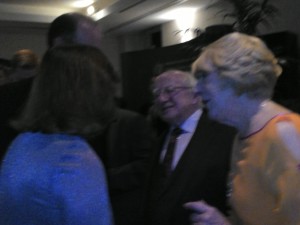 We then had some dinner (smoked salmon!) and talked with friends while the president and the other dignitaries kept the reception line going. Eventually, the line finished and Sile escorted the president through the crowd, greeting various people (including myself) informally before being escorted off to (presumably) dinner and bed. (He was heading off on another visit in the morning, flying off to Tigre.)

I was impressed and a little astounded at the schedule that someone in his position has to put up with. We had enjoyed food and wine while he stood and shook people’s hands and was pleasant. He’d just come back from a long trip, and he was heading off on another trip the next morning. He’s not a young man, but his week’s and night’s activities would wear out anyone.

A while after the president left, we encountered Sean Sherlock again as he attempted to eat some food. He immediately stopped to greet us, and we had to insist that he finish his dinner! We congratulated him on the agreements he’d signed with Ethiopia, including direct flights between Addis and Dublin. He asked us about ourselves and we chatted a bit before he had to rush off again. There really is little rest for such leaders of government!

We’d heard that the school was going to have a special assembly with a visiting astronaut, and I was particularly excited. I’m a bit of a “space cadet” and love anything to do with space exploration. I’d dragged my family off to the Kennedy Space Center before the final shuttle launch and booked a lunch with Astronaut Mike Mullane as part of the tour. So I was particularly excited to hear that Astronaut and NASA Director Charles Bolden was going to visit. I remember watching his speech as the last Space Shuttle mission ended, and it would be great to meet him in person and hear him speak.

I then got a message on Facebook from a friend in Paris: 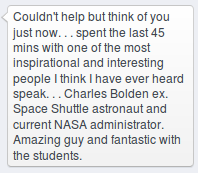 So on Friday morning, I was particularly eager to hear him speak. And it paid off. After a bit of technical glitches that I had to help smooth out, we were ready for him to speak to the High School students at 8:00 a.m. 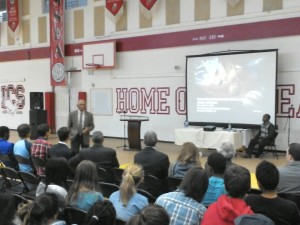 He had a prepared speech and slideshow which was good, but he made a concerted effort to involve the students, asking questions and moving among the audience. I had to leave to go to a parent meeting, but fortunately I got back in time for his second session with the Middle School and upper Elementary.

This second session went a little differently. He started out the same as he had with the High School students, telling the students that they were welcome to ask questions anytime. Immediately, dozens of students shot their hands up in the air. He laughed and answered the first question, and then more hands went up. 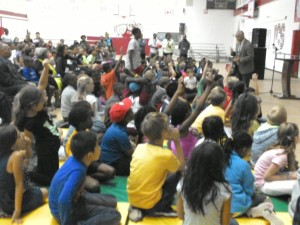 The session went on like that the whole time. Bolden basically abandoned his set presentation and answered the kids’ questions: everything from “what was it like being in space?” to “have we found signs of life on Mars?” to “is Pluto a planet?” He was game, engaging, and great at thinking and talking on his feet. He worked in some elements from his prepared talk, and directed his information at the students’ level. I was very impressed. A colleague told me that her daughter (a sixth grader who normally doesn’t say such things) told her that she thought his talk was inspiring. You can’t do better than that!

After the talk, I asked him to autograph my shuttle/ISS tie and he laughed and complied. He then headed off to give a talk at Addis Ababa Institute of Technology and the Ethiopian Observatory and Research Center. (Did you know that Ethiopia has a Space Science Society and an observatory?)

…as I said, there are perks to being an expat!

Fly me to the moon