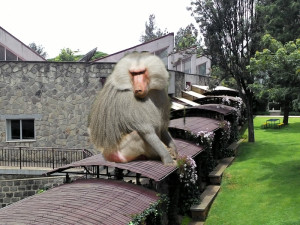 At first I thought it was a mistake. The lockdown signal played once, and that was it. I walked out and looked around. Students were crossing the quad, coming from lunch. I heard teachers talking to their students. Then I heard it again.

“Is that you?” the teacher next door asked? It was my voice, on the PA announcing a lockdown. (Why I was chosen to be the Voice of lockdowns, I dunno!) Quick, I ran across the quad telling the kids to quick get indoors. They looked surprised, and ambled off to class. “Move!” I shouted. I and various other teachers & the Middle School principal hustled them off indoors. We got the area cleared and I headed indoors.

I helped Wes, who was working in the computer lab, lock all the doors and draw the blinds. We retreated into the server closet, which was the safest spot. Sadly, we couldn’t hear the PA system there (something wasn’t working right) and, after the initial panic, I began to wonder about the lockdown. Was it just an unannounced drill?

We went out into the office, avoiding the windows, and started checking mail and announcements to see if there was any indications of what was going on. Then the announcement came through:

Attention, please. This is a real lockdown. A large baboon has been spotted on campus. Please remain indoors and keep doors and windows locked.

Alrightythen. So that’s what it was. Wes and I exchanged a few incredulous looks, and then I opened the door to go outside to see if I could spot the brute. (Yes, boss, I know: I was violating lockdown. I promise not to do that again ..unless it’s another baboon lockdown.) There were guards sweeping the area and looking to the Library. I then heard another teacher calling out from above, “It’s over there!” I went to investigate, hoping to take a picture. I couldn’t keep up with the guards (I’d just sprained my ankle), and the absurdity of the situation got to me when I spoke to Keith by phone (he was in my sight), and he said, “The hashtag is #ICSbaboon. Check out the tweets.”

Rewind a few days… We had just held the first Learning 2.0 conference in Africa, with hundreds of teachers from scores of schools around the world. Visitors from four continents. And we warned them that we might have a lockdown if a baboon entered campus.

It became a running joke in the conference: the baboon was on the bus. He was eating the ADSL line into the school. Everyone had a good laugh about it.

But now here we were: locked down by a baboon. I initially didn’t want to advertise it – it just  seemed too silly. But once our students were tweeting out photos of themselves locked into their classrooms, I couldn’t resist.

I fired up the GIMP, downloaded a public domain photo of a baboon from Pixabay, and quickly plopped the primate on top of a walkway. I sent it out on Twitter. Hilarity ensued. Some people didn’t get that it was a fake photo. (!!) Some posted it on Facebook. At least one person is putting it on her blog. I sent it off to Instagram.

The baboon was chased off, and life returned to normal at ICS. Until the next time…

I tend to think the whole situation a bit ridiculous: locking down the school because of a baboon? Isn’t that a real over-reaction?

But it strikes me that this is a clever ploy by our Head of School. (Bravo, Jim!) Now whenever we have a lockdown drill or (God forbid) a real lockdown, our students won’t be scared. They won’t freak out about the dangers that might be out there in the world. They’ll just think there’s a baboon out there.

And if they picture Baboonzilla towering over the Library and smile, then I’ll consider myself a real success!

The pleasures and challenges of online learning

The joy of a small bright dot of light