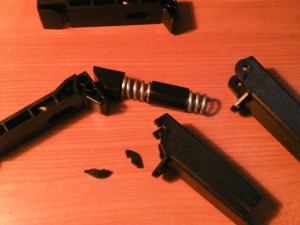 It’s always when you’re in a rush that these things happen. I was trying to print something quickly as we were heading out Saturday morning, when the paper jammed inside the printer. I lifted the lid and removed the jammed paper and then closed it. Or tried to. The lid wouldn’t close. It wasn’t seating properly.

Oh, $#%@! A quick wiggle to try to realign the lid and a shot of WD-40 (miracle juice) to help it move freely did nothing. More time was definitely needed.

After returning from the errands, a thorough investigation revealed that the hinge holding the lid of the printer (including the glass panel for the scanner) was broken. Specifically, the small plastic loops holding in the hingepin had broken off. There’s a good deal of pressure on that hingepin so that the lid stays up when you lift it, and that pressure had weakened and eventually broken the plastic.

I wasn’t optimistic, but I used superglue to try to repair the pieces. It might hold. Those ads for the glue show some fellow with his hardhat glued to a girder and him holding on to the hat…

I let the glue sit until the next day and started putting it back together again. First hinge went in OK. It was when I was putting the second one in that the first one blew: a nice noise and bits of plastic and a metal pin went flying across the room. I guess that guy with the hardhat used more glue than I had space for on these tiny bits of plastic.

So, I found myself yet again confronted with two fundamental problems that I encounter frequently when trying to repair things:

I’ve gone through this routine numerous times, with numerous devices: some small piece (it’s usually plastic) is designed in a way that when it eventually wears out or gives way, it’s irreparable. That tiny curve of plastic was all that was holding in the hingepin and there’s a strong spring pushing against it. Any repairs would have to withstand significant force. If I had a 3D printer, I could maybe make another hinge piece (I’d need a 3D scanner, too, to design the piece right…), but otherwise it’s dead.

There’s practically no chance I could find and buy a replacement part. This printer was made years ago. No doubt the newer versions have slightly different specs and this particular part is made differently. If I contacted the manufacturer, they’d just try to get me to buy a new printer. (It would quite possibly be cheaper than buying the replacement part!) Perhaps I could find a used printer like this for sale somewhere and cannibalize it for the hinges, but that would kind of defeat the point of repairing it.

Then it hit me: I didn’t need to fix it.

I put all the pieces from the hinge carefully into a plastic bag (who knows? maybe I will find a replacement…), re-wired the scanner to the printer’s circuit board, and then set the lid carefully down on the printer body. Plugged it in and turned it on and voila! It works just fine. I’ll need to carefully lift the lid when I replace the ink cartridges because there’s no hinge, but otherwise everything is functional.

So, that brings up a conundrum:

If a device is working with the broken part removed and not repaired, is the device fixed …or is it not?

I’ll ponder that while I go and print something out.