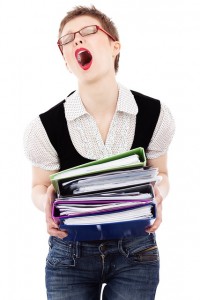 It’s not intuitive. It’s too hard.

Such goes the typical dismissive comment on software or a website that someone isn’t familiar with. It’s a good way to diss an application without admitting that you don’t want to take the time to figure out how it works. Things should be so simple that anyone can just pick it up and immediately know what to do. Isn’t that how everything should be?

Maybe not. Maybe it’s a good thing that things are not easy to figure out, that it takes some effort. Maybe the constant work to make things effortless and intuitive means we are actually losing something.

Here are three things that happened to me today:

It’s one reason that I’ve become devoted to open source software. Such software is usually highly capable and feature-rich, but you often have to work at it. You have to think about what you want to accomplish and find out how to go and do it.

Another example: a colleague commented to me that he wanted his students to annotate PDF files. He had a Macbook and the bundled Preview application has some good annotation functions. His students who were using Ubuntu said they couldn’t do it in their PDF reader, so he’d asked for help in figuring out how the students could annotate the PDF documents.

In five minutes of searching, I found references to three software applications that could partially do the job – none satisfactorily. However, one website referred to a solution which jogged my memory and resulted in the best response. LibreOffice – which is installed on all our computers – can open a PDF and it has a wide variety of editing and markup tools. Problem solved!

Am I a genius? Am I an Ubuntu expert? Not at all. I just knew that I would have to go and look for the answer, test out possible solutions, and settle on one that worked the best in the given circumstances. That teacher could have done it. Any of his students could have done it. It didn’t take intelligence on my part – it just took the realization that the solution wasn’t intuitive but required some problem-solving.

As a teacher, and as a parent, this is the kind of thinking that I want my students (& child) doing. I want them analyzing a situation, considering what objective they want to achieve, and then looking for and analyzing potential answers. Isn’t that what all teachers and parents want? Do any of us really want our children simply intuiting the answers to their problems?

I realize that this is one perspective and that another one is simply: tools should be easy to use and we shouldn’t have to work too hard to figure them out. I get that. I shouldn’t have to Google how to use a screwdriver. However, most computing tools are less akin to a screwdriver and more similar to internal combustion engines. Those do really require some study and serious cognition.

So here’s to complicated software. It forces us to think.

Why I use free/open source software