Quite possibly the greatest words a teacher can hear – this time they scared me silly.

It was about three-quarters the way through the lesson. I was working with just the 9th graders in class – the 10th graders were out doing some practice college entrance exam – and we were extending the work they’d done the week before. I had been away at the Learning 2.0 conference in Singapore, getting some fantastic professional development, and the students had disassembled and reassembled desktop PC’s, identifying and  researching the various components of a PC. Today, we were looking inside a (broken) hard drive and talking about storage and the difference between magnetic and sold-state drives.

The conversation strayed into the difference between computers and other electronic gadgets, particularly mobile phones. We talked about the similarities and differences, and students brought their phones out to examine them. Some asked about opening their iPhones and we talked about iOS vs. Android, Apple vs. other manufacturers, and the maker manifesto, “If you can’t open it, you don’t own it.” 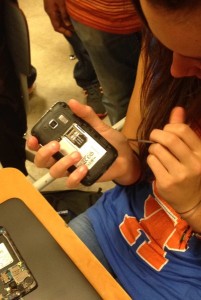 That’s when Maxine asked if she could open her phone. I was hesitant but she was eager – it was an older Samsung phone (she also had an iPhone) and she was determined. I had visions of receiving a call from her parents complaining that I’d caused her to break her own phone …but it was a great learning moment. I would just have to cope with parental anger! So I sent her off to the Help Desk to get some screwdrivers and she came back a few minutes later, full of excitement.

The class all gathered around her desk as she started in. One boy brought out his phone to take some photographs. There was a noticeable buzz in the room as everyone was thrilled by her doing surgery on her working phone.  She got the screws out but was having difficulty getting the plastic backing off. The buzz started fading.

That’s when I really got over the fear that damage might be done. I took out my Android phone and handed it to Maxine. “Here, Maxine. Take mine apart.” The look in her eyes – and the amazement of the others – was literally priceless. Certainly it was more than the cost of the phone.  They were all excitedly chatting and the camerman switched to video. I laughed. “You all think that Maxine is going to break my phone, don’t you?” I asked. Maxine looked up at me, fear in her eyes. “Relax, Maxine. I trust you. You’ll do fine.”

Everyone was thoroughly engaged as Maxine took the screws out and then carefully prised off the plastic case. (She handed it to me when it got a little difficult.) We all examined the insides of the phone, identifying the powersupply (battery housing), storage (flash card slot), input (camera) and outpout (speaker). We talked about what else we couldn’t see, how we might take the screen off, etc. Kids were saying, “I’m going to do this at home!” (I urged caution! I told them of my fears of getting calls from their parents.) They were

That’s when I had my moonshot moment.

I looked at the students and asked them, “If we had a class or activity where you could take apart a toaster and find out how it works, build a lamp, change the plug on an appliance, explore how a car engine works, etc. would you want to do it.” All of them – especially (and most gratifyingly for this father of a 9 year old girl) the girls – all eagerly said, “Yes!” They were all buzzed about the idea and they were chatting about it as they filed out of class. (Maxine carefully reassembled my phone!) One boy came and talked with me about jailbreaking his phone.

So there’s my mission: build a makerspace for our students. I’ve got no budget, no space, no equipment. It will have to start slowly – maybe with an afterschool activity with some limited initiatives. But we can then build a space, get some tools and help students learn to dismantle, reassemble, fix, build, make, create.

Why I use free/open source software