If MIT’s Media Lab really does believe in “Lifelong Kindergarten,” why should the children have all the fun? If we really think people learn better through play, creation, experimentation, etc. then why do teacher workshops and other PD efforts involve so much blah blah blah?

Thus thinking, I organized a “playdate” for my group who are participating in the online “Learning Creative Learning” class through MIT and P2PU. Rather than a roundtable discussion on the readings and our reactions, I reserved the gardens for one of our campus buildings, invited families and children, organized snacks and drinks and brought out some toys and games.

The formal purpose was to recap the readings and thinking of Week 1 and get ready for the work of Week 2. In Week 1, we read Mitchel Resnick‘s paper, “All I Really Need to Know (About Creative Thinking) I Learned (By Studying How Children Learn) in Kindergarten.” For Week 2, we’ll be reading a variety of articles on interest-based learning, and part of the activities we are asked to do is the “Marshmallow Challenge.” Between the hands-on creative nature of the challenge and the paper’s thesis that kindergarten-style learning (a cycle of imagination, creativity and play) should be applied to learning at all ages, there was plenty of opportunities for creative learning.

Our group assembled with kids and soon settled down. I called the boys (and my daughter) over and stopped the impromptu soccer game. “Play time is over,” Ryan said. “Nope,” I said. “Play time is getting going. Soccer time is over – for now.” I then explained the rules of the marshmallow challenge and answered questions. (In a nutshell: with 20 sticks of dry spaghetti, 1m of tape & 1m of string, make a structure to hold up 1 marshmallow in 18 mins.)  There were two teams: the adults and the kids. Eagerly, they all got started as I began the timer. True to form. the adults sat around for a few minutes discussing and making plans. The kids got stuck in quickly and started building. 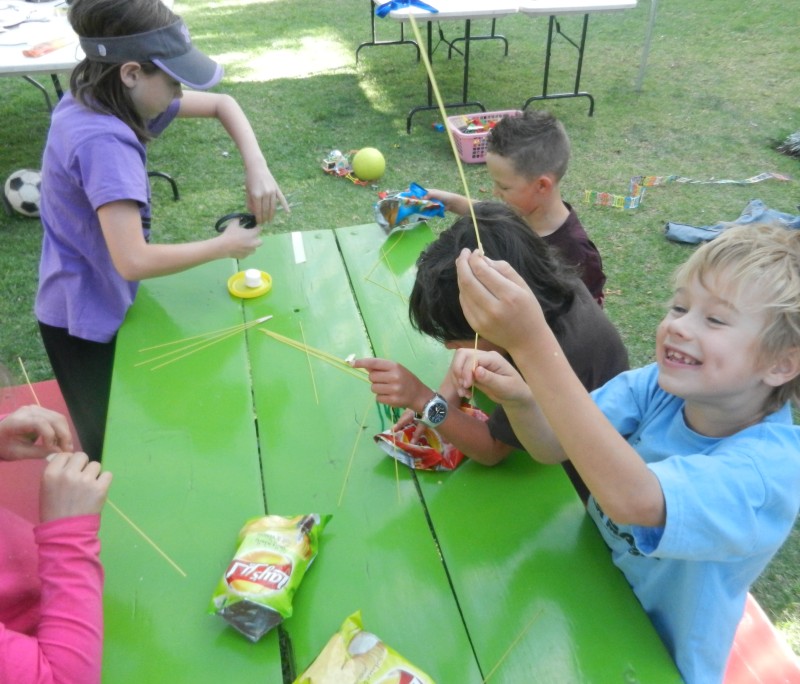 I circulated, watching and commenting. The kids were going full-tilt, building, testing, talking, laughing. The adults were being more methodical and planning things out more. I quickly realized one tactical mistake I’d made: the kids were from different classes and grade levels. They weren’t used to working together and I’d given them no instructions on doing that. They were all going their own way rather than working together. If this had been a class, I could have got away with what I’d done but with them all being unused to working with each other it looked like they weren’t going to get far.

The adults, meanwhile, were discussing various strategies and starting to test things out before building. A couple of them had seen the TED talk about the challenge and so knew some of the techniques to use and some of the pitfalls to avoid. They were strategizing and testing, rather than simply designing and building a structure. They were also able to work together easily: everybody were either colleagues or friends or both. (Family, too!) 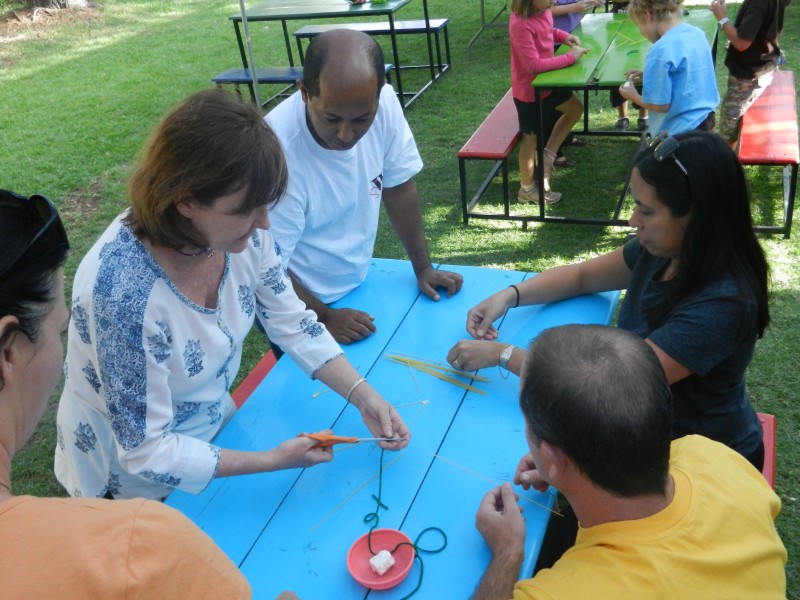 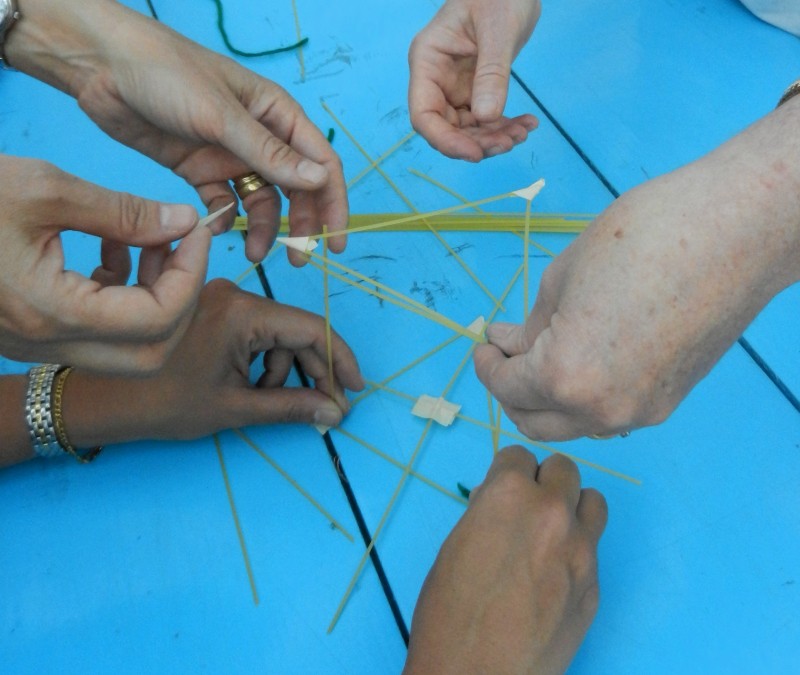 The two groups worked very well and had great discussions. I heard plenty of “try this” or “what would happen if…” and other types of good brain-stretching discussions. People thought creatively: one of the kids – Nadia – came over to see what the adults were doing. I congratulated her and told everyone that there weren’t any rules about spying or trying to get ideas from others. (The adults then caught on!) One of the kids – Alanna – was first to get a standing structure and again I congratulated her and suggested the kids all work together to help her get her structure higher. Unfortunately, many hands in that case meant snapped spaghetti, and as the kids saw the adults’ structure taking shape they grew discouraged. All of them drifted off – my daughter had a tennis lesson and the boys wandered off to find the soccer ball. Only Alanna worked on, determined.

The adults managed to finish in about 15 minutes and wanted a measurement before the time went up – 48cm high! A good accomplishment! 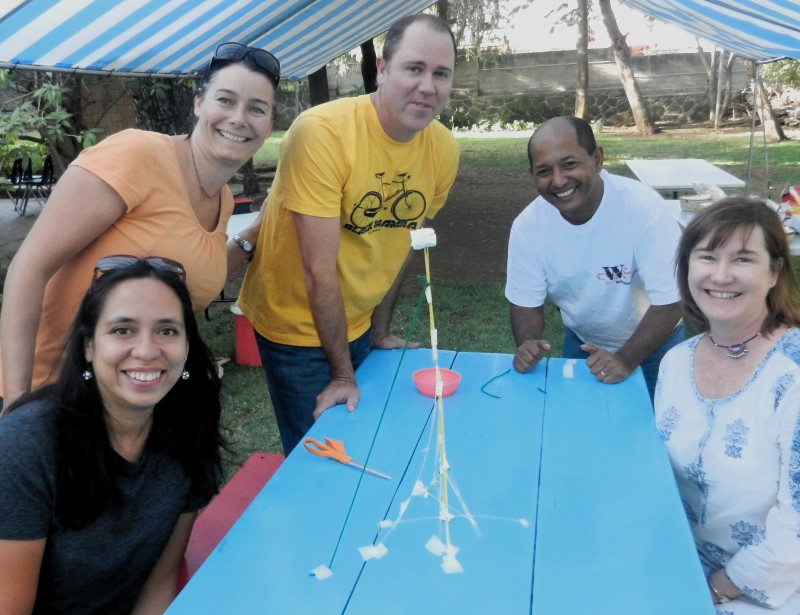 We discussed what had worked and what led to success. We shared tips we’d seen on the video and the website, and related it to how the team had worked. We talked about how this type of activity could be useful in a class – Sienna wants to use it right away with her GILA (Global Issues, Local Action) class. I mentioned that it might be good for more hands-on type classes such as GILA or Sciences, but probably not a good activity for English class. Helen immediately put me right: she’d have the kids build a tower and then write about it. She’d also ask them to draw an analogy between building the structure and composing a story: the need for a good foundation, keeping things balanced, having elements that support each other, etc.

Meanwhile, Alanna continued on, determined to not only complete a structure but also beat the adults. Working alone, she bent the rules and found the tape roll, adding plenty and reinforcing her spaghetti tower. We adults discussed the pros and cons of breaking rules: one whole chapter in a book I was consulting (A Whack on the Side of the Head by Roger van Oech that I’d borrowed from Sienna) was about how creative thinkers often had to break the rules. (I related the story of Alexander the Great, who became fated to rule all of Asia by unravelling the Gordian Knot …with his sword!) Breaking rules is just a form of “thinking outside the box” and definitely something to be encouraged (avoiding illegal, unethical or immoral rule-breaking!). At any rate, Alanna’s diligence and creativity was rewarded as she built a tower that stood well higher than the adults (until it drooped). 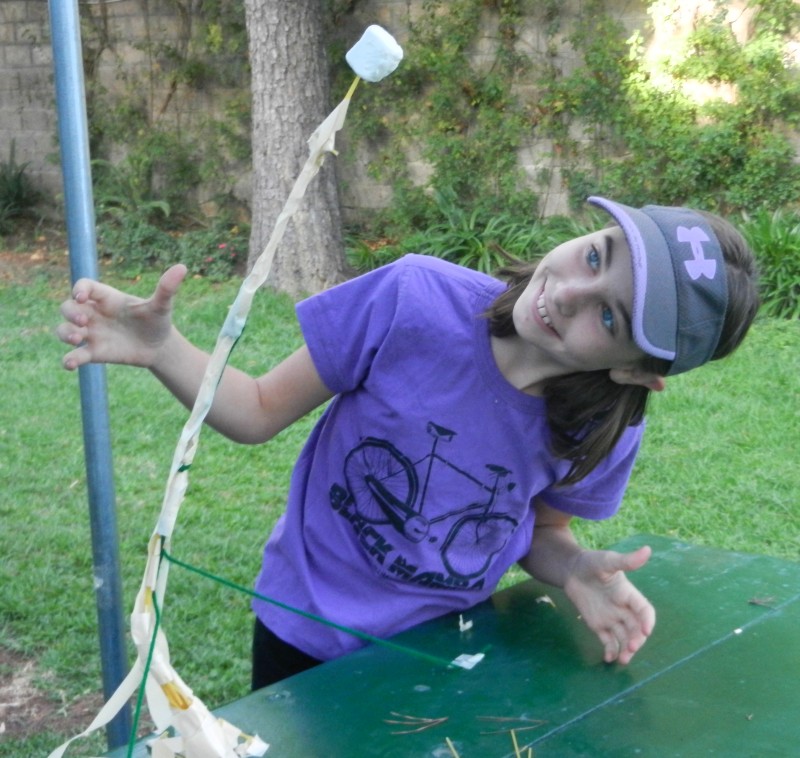 She ran off to join the other kids in undirected play while we adults went on to another activity. I’d thought of how such play and creation could be brought into the more abstract realm of words and ideas and designed an activity that I hoped would bridge the gap. I took the abstract from our week’s reading and cut it up into individual words. I then spread out the words on the table and encouraged the group to come up with one or more phrases and sentences that brought out the key ideas from the reading. 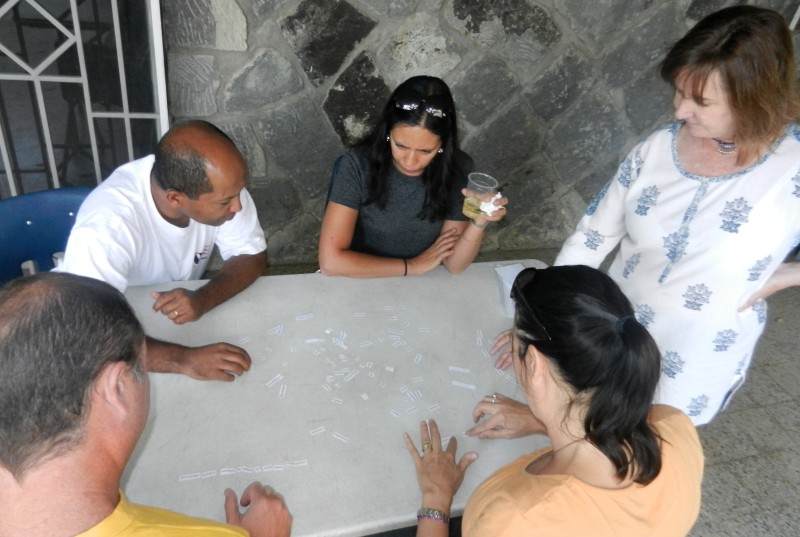 Everyone came up with their own phrases – I realized that maybe I should have split them up into pairs rather than one big group. But there were great discussions around the table about how “imagine” related to “learning” or why the word “traditional” was in the pile and so forth. I’d included some blank strips for people to include words that they couldn’t find, and some used those – again, rules can be broken for creative thinking! There were some great ideas expressed in these “constructed” phrases – and the process of building, trading, sharing and comparing was fun to watch and be a part of. 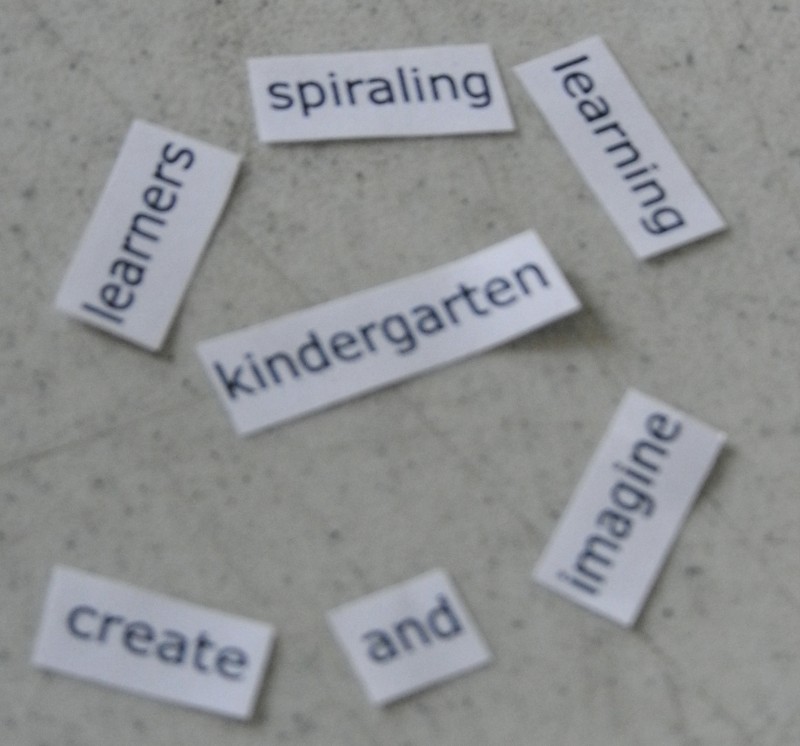 Meanwhile, the kids were all enjoying undirected play. Some were running around, creating games with action figures. Others were building with Lego bricks. A few were building things with a set of flexible snap-together pieces. The creations were quite clever: skirts, balls, slings for carrying and firing balls. 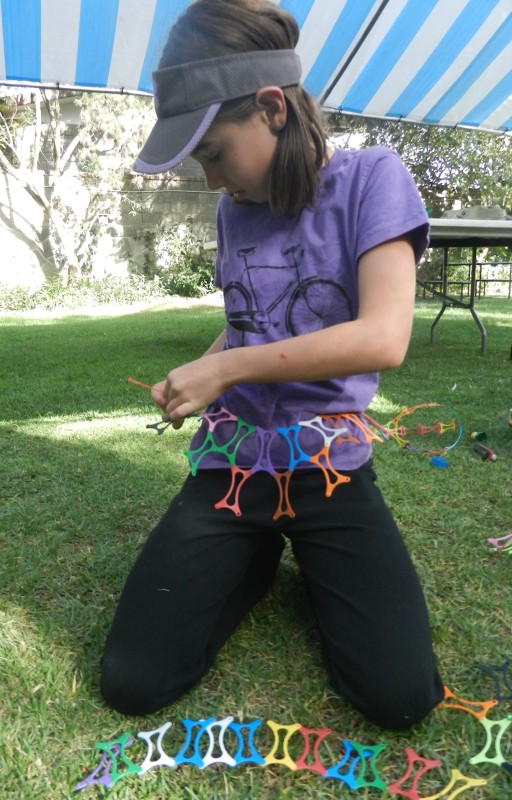 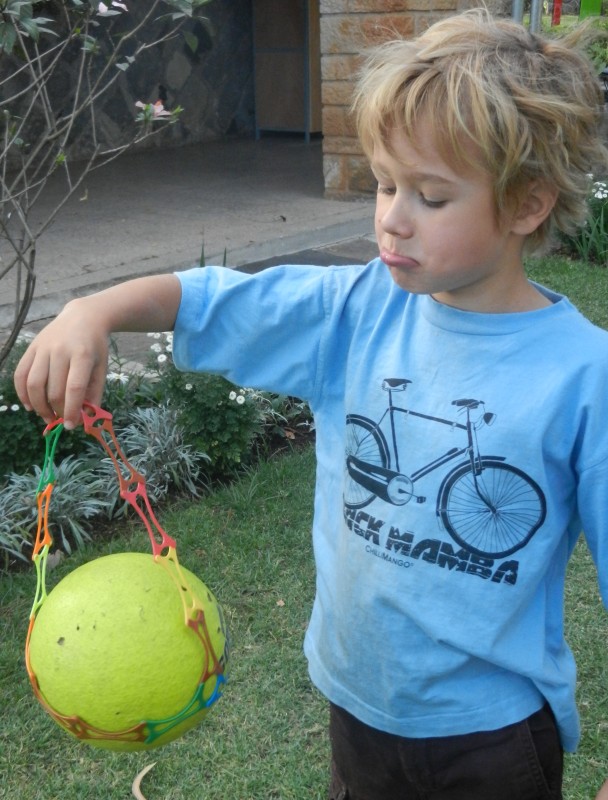 Meanwhile, the adults moved into more traditional discussion punctuated by a few more creative tasks – puzzles and thought problems. We talked about the excitement and creativity we’d seen that day and how we could incorporate it into our own classes. We discussed some of the institutional and logistical issues that prevented such play and creativity from becoming widespread in our or any school. We thought of some fun projects that we could do with students as part of classes or after-school activities.

And we talked about how much fun we’d had that day and how great it would be if more teacher work time was creative and constructive and playful and not so much lecture-style. I acknowledged that my own preparation for the day’s activities was greater than if I’d been trying to lead a more traditional discussion session (although not more than if I was going to do a long lecture!), but said that it was much more rewarding.

I think we’re going to have regular adult/family “playdates” throughout this class. What fun!

Full STEAM ahead with Grade 10 students

Instant Gratification: The Joys of Coding