Perhaps the most striking thing is the sound. A sharp puffing breath as air bursts out, repeated over and over. I suppose I should have expected it – on reflection I can’t think why it surprised me, but it did. So we sat and gently rocked with the swells and watched in awe and delight. The repeated “puhhh” “puhhh”  reminding us that these animals lived in the water but had to leave it repeatedly to keep on living. 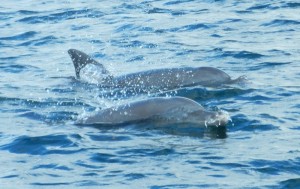 The first day of the new year was a perfect day to go dolphin-watching. My niece was turning nine years old and a combined dolphin-watch and snorkeling expedition was a great way to celebrate. The early start was a challenge to some of us who’d been up late seeing in the new year, but we all put on a brave face and headed out. We’d hired a glass-bottom boat and it was waiting, moored by the beach just in front of our house. That the name Milennium is still being used in 2013 raised no eyebrows amongst us or the crew. The engines fired reliably and off we went.

We headed straight out from the house and went through the mlango – the gap in the coral reef that gave us access to the deep ocean. The change in the water was noticeable, as the swells caused the boat to roll slightly, but the sea bottom didn’t drop away. We still watched the thalassadendron sea grass slide below the window in the floor of the boat. I went to the roof of the boat and joined the children in the sun as we scanned the water for dolphins.

The voyage quickly took on the cast of a safari game drive. The skipper kept the engine running smoothly but not quickly as we slowly cruised along, with the spotter on the roof looking for tell-tale signs of game – and all the family doing the same. The skipper’s phone rang and he chatted in Kiswahili with another skipper, asking where he’d seen the dolphins (pomboo) earlier. Like the tour buses in the Masai Mara, the boat skippers here all share info on the best game-viewing spots. We passed a fishing boat, hailing the fishermen who gave their own input – they hadn’t seen any dolphins that morning. 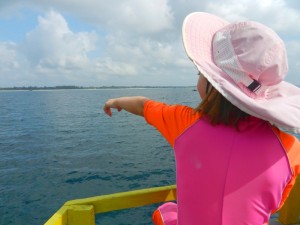 “There!” The spotter called out, pointing off towards shore. We all looked and pointed as we spotted them. It was difficult to focus and spot anything with the sun glinting off the small choppy waves. Fins and gray backs appeared and disappeared in a rhythmic, arching motion. We could see a few dozen dolphins in three groups just outside the reef. We cruised closer and cut the engines – and that’s when we heard them breathing. “Puhhh.” “Puhhh.”

It’s amazing to think of these animals that live in the water but cannot breathe in the water. They spend their whole lives – eating, playing, mating, sleeping – in a medium that would kill them if they were unable to leave it. So they swim close to the surface, edging out of their water home into the air every time they have to breathe – like human swimmers, pacing their breaths between each stroke. Evolution is an incredible thing. Marine mammals are just so illogical. Imagine if we couldn’t breathe the air, but had to dip our heads into the water and suck in water every time we had to breathe. 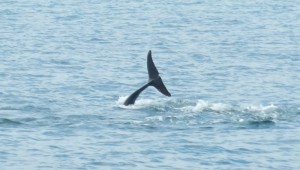 We watched them swimming and playing. Occasionally one would breach, jumping into the air and falling back into the water. Sometimes a tail would emerge, flapping its flukes against the surface of the water. Adults and children alike were enthralled – choruses of “look!” and “did you see…?” accompanied eager finger-pointing. Everyone had a big grin on their face. There really is something quite special about watching animals in the wild. Apart from the delightful spectacle of seeing animals in person that we’re used to seeing on television or film, it is quite special to have the chance to watch them act naturally in their home environment.

Angels in the Architecture